King of the World

About two years ago, a handsome young man with copper skin, mesmerizingly haunting dark brown eyes and a smile that lit up the entire Asian continent first step foot in Toyama, Japan.

Like every fairy tale, this young Maharaja from the stunning Caribbean islands of Trinidad and Tobago came across an evil villain, named Tateyama. The young prince who had always been able to successfully and skillfully conquer all of his battles was unable to defeat this Goliath.

The brave young prince, who had a heart of gold and a voice that even the angels envied, had a secret fear. He was unabashedly afraid of heights.

Two years prior, paralysed by overwhelming fear, the young Maharaja intent on climbing to the zenith of the Holy Mt. Tate conceded defeat, halfway on his quest to the peak, and vouched some day he will reach the top and claim a worthy victory.

And that is how the story began.

The young prince who had been nursing deep shame for more than 730 days had decided that on the eleventh day of August in the year of two thousand and ten, he shall for a final time try his best, putting aside his genuine fears, and climb Tateyama once more because he desperately wanted to see the famed Oyama Shrine and receive his blessings.

On the morning of his quest, the sky smile along with the young prince, showering him with brilliant golden rays of sunlight. The prince bowed his head ever so gently and thanked the heavens because knew this would be the day he would make it.

However, as he arrived at Murodo Plateau, with an altitude of 2,450 m (8,038 ft), a dark omen whisked its way across a now gloomy sky. Fog blurred the prince’s vision, chilly winds ached his tiny muscles; the peak of Tate seemed once again elusive.

The young prince cried in deep fear as he kept climbing not because he was scared this time but, because he didn’t want to be a failure to himself again.

After hours of slowly climbing, rock by rock, boulder by boulder, breath by breath, the young prince finally appeared, after what seemed like an eternity, through a thick cold mist, raised his hands in victory and with the the biggest smile that radiated from deep within his heart, he silently whispered to himself, “Thank God I’m here at last.”

The young prince then patiently joined the queue of people waiting to receive their blessings from the monk at the Oyama Shrine at the peak of Tateyama, overlooking all of Toyama.

And, this is how a young prince became a king.

After more than two years, I, the young Maharaja, finally made it to the top of one of Japan’s Holy Mountains and I am so happy and proud of myself.

Mount Tate (or Tateyama 立山) which stands a towering 3,015 m (9,892 ft) is one of Japan’s “Three Holy Mountain’s” along with Mt. Fuji ( 富士山) and Mt. Haku (白山).  Calling its landscape magnificent is an terrible understatement. Tateyama is carpeted with lush green vegetation that seems to undulate as far as the eye can see. Sporadic outbursts of brightly coloured flowers of pleasant purples, warm yellows, blushing pinks and innocent whites make this spectacular landscape that more beautiful.

Tateyama’s truest beauty, however, is the hundreds of people who climb it every day during the hiking season and kindly wish every person a welcoming “Konnichiwa.” Struggling to meander your way to the peak and having elementary students and grandmothers and grandfathers utter an encouraging “Ganbarou” (Let’s do our best) fills your heart with much needed courage.

I always believe that each experience, each person, each seemingly trivial event has some impact, unknowingly or not, on our lives. It was this singular event that reminded me that our biggest fears are too often what we inflict upon ourselves.

Making it to the top, listening to a monk draped in a humble orange robe, chant in a language I barely understand and offer me a cleansing sip of osake was well worth the two year wait. 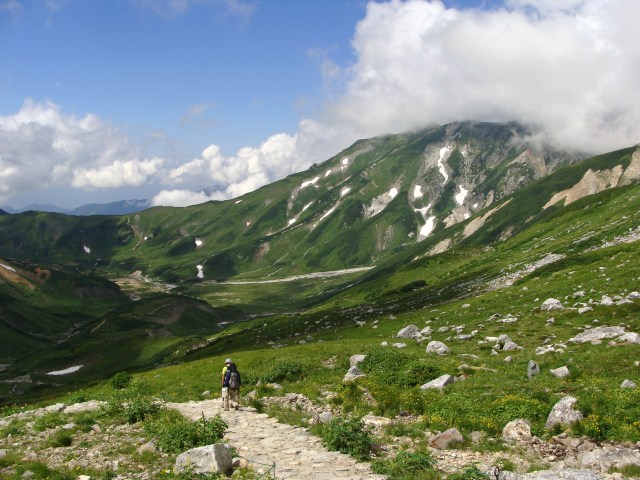 Jenson recommends: Regardless of whether you make it to the top or not, as long as you genuinely try your best is truly what really matter. Now go climb your Tateyama =)

Side note: This was  written on August 12, 2010. Yesterday, I climbed Tateyama once again, experiencing the same struggles I did when I first climbed four years ago and it was a pleasant remember that through determination and belief in ourselves, anything is possible.

This entry was posted in Japan, Life, Toyama, Travel, Trinidad and Tobago and tagged climbing, hiking, king of the world, life lessons, struggles, Tateyama, trying your best. Bookmark the permalink.